Tang Zhengping and John Allen – Brothers from Another Mother

This week we begin the more pleasurable work of installing pieces and wiring them up on the 2008 Cadillac Escalade EXT.  Some mounting issues.

We installed the two Soliton1 controllers at angles above the motors much after the fashion of the old Ford flathead V8.  This allows access to all the terminals and still access to the motor terminals underneath.  We mounted the Solitons on a piece of our aluminum aircraft decking honeycomb material, and by angle aluminum to the upper mounting bolt on each of the engine mounts.  This held well enough, but allowed a little wobble.

Brain installed some brackets to tie the decking to the rear Garret turbocharger fan and to the top bolt in the transmission adapter.  This left them rock solid.

We also mounted a Vicor Megapac in place of the lead acid battery on the battery tray.  This unit features six 5v 40 ampere cards and two 15v 10 ampere cards.  We strapped these up to produce 15 v at up to 100 amperes.  It reads right at 15.05v unloaded and our systems in the Escalade should work very well at that voltage.

We mounted the throttle body inverted on top of the Megapac using a couple of pieces of bathroom plumbing.  It is inverted so that the butterfly valve, which is not entirely necessary, can clear.  I want to retain this as it gives me a good visual indication of what the ECU is doing with the throttle, and I can reach in and give it a twist myself for test purposes.

We added a diode to the input of this device.  I’m reasonably certain this was what was causing the Chennic DC-DC converter failures – back flushing the input caps into the batteries.  As one viewer pointed out, the Vicor already has a rectifier in it so the diode should be redundant.  That makes sense, but we’re still going to use the diode.  I don’t know exactly WHAT is in the Megapac, or in what order.  I know the power goes through a fan first, which seems to work from AC or DC indiscriminately.

We are going to buffer the throttle position signal with an LM1458 operational amplifier.  We bring out the ground and the 0-5v from the throttle body, tie them to the LM1458 along with our 15v supply.  The LM1458 can operate from +/-18v. And we bring the same ground out with the LM1458 output to the Soliton throttle inputs. 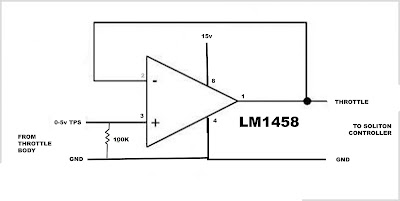 By tying the LM1458 output back to the inverting input, it becomes a voltage follower.  Whatever voltage we put in, we’ll get a pretty close approximation of that as an output.  So why do it?  The input to the opamp is on the order of 10 to the 12th power ohms in impedance.  It acts as a buffer to avoid loading the throttle position signal output to the ECU.

I get a lot of comments about the parallel motors and controllers.  We tested this a year ago and it’s just not a problem.  The two motors are on a single shaft.  The outputs do not precisely fight each other.  Rather like batteries in parallel.  That current would vary between the two is first not an issue, but the load existing equally along the shaft tends to even out the currents anyway, regardless of any discrepancy between the two controllers.  It just isn’t a problem.

Brian reinstalled the air condition compressor and power steering pump on the front adapter plate of the motor.  We have not installed the belt as we want to run some motor tests without aimlessly running the pumps.

Much work remains, but we are at the part where things start to move more quickly.  The heavy work of battery boxes and motor installation and mounting are behind us.  It’s now a matter of finding cunning places for contractors, disconnect switches, terminal bars, the heater, etc and hooking them up.  We also have to devise a liquid cooling system for the Solitons.  We already have this hanging on the test bench so most of it will just be moving it.
We’ll want to add a relay and use one of the Soliton outputs to run the pump only when cooling is called for by the Soliton itself.  A welcome feature in the more recent software releases.

John Allen continues his series on his Toyota rebuild.  I’m fascinated by this rebuild as John does not appear to be a master fabricator, and he is very value conscious as to his components.  His battery heater appears to work well despite all the warnings from the armchair builders, although I admit even I cringed when I saw all those resistive wires together in his junction box.  It appears it is a gentle heat.

John failed in this video, and on multiple fronts.  His controller blew up on him apparently, and his magic number on his motor adapter appears to have been off sufficiently that when he disengaged the clutch his flywheel gouged out a fairly impressive ravine in his motor adapter plate.

So why is he smiling so broadly.  Well, he just finished his first run in the SAME Toyota that used to have about a half ton of lead acid cells in it.  Only now it doesn’t.  The result doesn’t feel like an improved car.  It feels like a DIFFERENT car.  He’s going from zero to 80 mph in better fashion than the Toyota could with the ICE engine and he still has pedal left.  Instead of a ponderous climb, it is a delightful acceleration.  And you just never get over it.  But there is NOTHING like that first roll. Ergo the EV grin even WHILE facing some major rework.  Gotta love it.

This is what its about gentlemen.  For those of you watching and planning and hesitating, you don’t HAVE to be a master fabricator.  And the personal satisfaction of making a car GO on battery power from one of these conversions is just not something I can type yourself smart about.  You have to feel it.  It is gynormous.  It’s a head rush beyond what drugs can deliver.  ANd it lingers for days, weeks, even years.

It will cause you to rip that motor that you took weeks installing out in four hours just to get it fixed and back on the road.

And it is quite universal.  Our Chinese builder of the week, and faithful EVTV viewer Tang Zhengping invested the equivalent of $1600 in ducats in his 90 mile range creation.  For those who don’t speak Mandarin, what he is saying in the video is that he built a freakin electric car himself and he feels really really good when he drives it and f*** a bunch of oil companies.

It’s springtime and I’m driving around in the ivory Speedster Part Duh we did two years ago.  It’s not just that I can’t get over it.  Every stop at Lowes Hardware, the grocery store, anywhere involves an inevitable discussion with perfect strangers that are just bowled over by the car.  When they find out it’s electric, – cranial detonation right in front of you.  The front of their head just implodes.  We’ve gained enough notoriety locally that they are becoming much more aggressive.  “Your the guy with the electric cars…right?”

I am indeed the guy.